OUR STORIES: Diane’s mom — the rest of the story…

Read Part I of this story here.
Idaho Facility Standards, FS, finally made an appearance at the facility 14 months after my initial complaint.  This assisted living facility was found guilty of abuse by Small Claims court deeming it necessary for me to remove my Mom for her safety.
This finding did not warrant a timely investigation in the eyes of the Agency.  The long history of abuse which was documented by Facility Standards and the local Ombudsman did nothing to expedite the investigation either. Conveniently they waited till the facility was sold before doing their investigation. Facility Standards is too burdened with complaints and inspections of new facilities that they often turn a blind eye to many complaints.  The Ombudsman had neglected to investigate or document several complaints as well.

When Facility Standards did come to investigate they still found people being drugged, physically restrained along with other abuses. 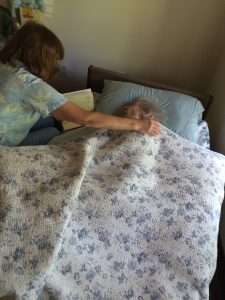 They reported this information to me but not the abused families, not to adult protection, not even the police. The facility was given 30 days to “fix it” by sending in a report telling what they’ll do.  4 months later, the state still hadn’t returned to check on this facility.

The only state agency which tried to help was Operational Licensing.  After 2 years they found the administrator guilty of abuse.  Her license was revoked but can be renewed.  No fine or jail time.

If you know someone who needs help, please share your story with us and give us your information so we can help you!  We can make a difference if people become aware!

Although she is in heaven now, her memory lives on with our cause.